Normally it would be a Autumn day on the shores of Lake Como that we’d see the Tour of Lombardy come to its conclusion. The ‘race of the falling leaves’ with its twisting turns, its famous ascents and sketchy descents is always the final Monument of the year – until 2020 came. Coronavirus means a mix up and sad as it is that Il Lombardia cannot take place in its usual slot, at least we’ve got racing going ahead.

Because the calendar serves itself a different purpose as riders prepare for all three Grand Tours jumbled up out of order, this year’s Il Lombardia has a new role to play. Riders expected to take on the Giro d’Italia this year start the race, so hopefully it’ll give us a flavour of what to expect come October 3rd. 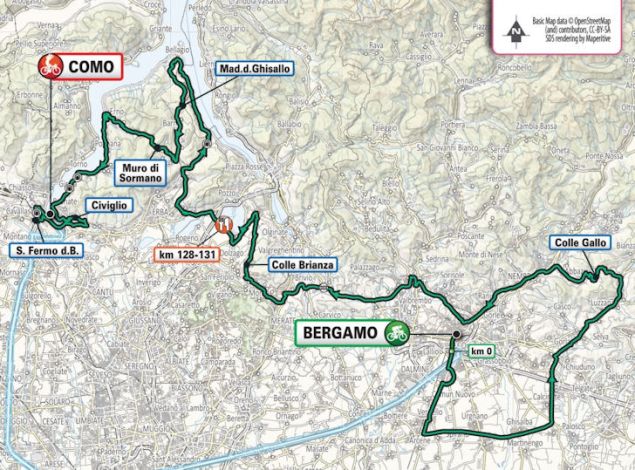 In the past, it’s always been the case that Il Lombardia decides to alternate between Bergamo and Como. In the past few editions, a finish on the shores of Lake Como seems to be the set in stone finale with the Civiglio and San Fermo della Battaglia climbs making an interesting conclusion.

The overall route amounts to 231 km, the Madonna dell Ghisallo and the Muro di Sormano are the two famous climbs everyone in world cycling should know about. The Sormano is the toughest with narrow roads and a 27% gradient. To win Il Lombardia you need good climbing legs and a nerve to descend the fastest downhills. After the San Fermo della Battaglia comes a 5.3 km descent into Como, where anything could happen!

So who are the contenders to take the 114th Il Lombardia? Picking a winner for the ‘Race of the falling leaves’ is like trying to find the prettiest leaf on the side of the road – you just cannot call who will win!

Defending champion Bauke Mollema starts for a Trek-Segafredo team that always includes a former two-times winner in Vincenzo Nibali. An Italian sponsor for the team, expect Mollema and Nibali to try and put on a show for this one!

The big name on everyone’s lips right now is a young Belgian who has won all four of the races he has ridden so far in 2020. Since resuming from shutdown, Remco Evenepoel has won Vuelta a Burgos and the Tour de Pologne, even showing support for fellow teammate Fabio Jakobsen after his awful crash by holding his number in the air – a very classy moment by the young man!

There’s no doubt that Evenepoel with all the talent that he has is a favourite this weekend but also a favourite for this year’s Giro d’Italia. This will be the first opportunity to see how Evenepoel and Nibali fare up against each other – one rider making his Monument debut the other with bags of experience. Despite a lack of experience, no knowledge of Il Lombardia or a significant age gap between the two riders – surely we should expect Evenepoel to perform well this weekend. If he wins the race, it’ll definately he his best career win to date, 20 years old don’t forget!

One the same roads at the Giro last year we saw how Primož Roglič had a nightmare on the descent of the Civiglio up against Vincenzo Nibali, so could he do the same and add pressure to Evenepoel on the descents? The ‘shark of Messina’ could probably ride the roads of Il Lombardia with his eyes shut as he’s accustomed to winning this race before – 2015 and 2017. With young talent on the scene, lack of experience could hamper their chances and there’s every chance an old head could win this year’s race.

Fourth overall at Paris-Nice before cycling’s temporary shutdown, Nibali goes into Il Lombardia as a contender alongside defending champion Bauke Mollema. The Dutchman does seem to riding consistently in recent weeks at the Route d’Occitanie (where he finished fifth overall) and the Tour de l’Ain (finishing sixth overall). Mollema is due to ride at the Tour de France in support of Richie Porte, so he could ride in support of Nibali this weekend instead of going for it himself. Trek have their options too as last year’s stage winner and KOM jersey at the Giro, Giulio Ciccone also starts.

Is Mathieu van der Poel a contender this weekend? He has yet to win a race this season but in all fairness he only has nine days of racing in the legs so far this year. Third place at Gran Piedmonte this week could be an indicator that he’s starting to find his mojo again. Just like Remco Evenepoel, we maybe put too much pressure on young shoulders, both making their Monument debuts. For Mathieu van der Poel, he’ll expect himself to perform but from a fans point of view perhaps we don’t expect too much just yet.

We should expect Jumbo-Visma’s George Bennett to go well this Saturday though. The Kiwi could put a stop to all the talk of youth by winning Il Lombardia and show an experienced head and surprise us all. An excellent ride to take Gran Piedmonte this week, Bennett is also expected to be in Jumbo-Visma’s Tour de France squad later this month and they’d be pretty stupid if they didn’t include him. He’s in form, he’s got the ability, he has the experience – wouldn’t it be something for George Bennett to add another one-day race to his palmarès.

One rider to keep an eye on is the winner of last year’s Giro – Richard Carapaz. 27-years-old, lots more to come, riding now for Ineos after transferring from Movistar, the big question for Carapaz is what form will he bring before the Giro starts in October? The Ecuadorian won a stage but crashed the following day at the Tour de Pologne, so the question mark is how’s the recovery going? He’s never ridden a Monument since starting out as a pro four years ago, so maybe not a contender but Richard Carapaz is one to watch.

Astana arrive in Lombardy with two names to watch out for. Jakob Fuglsang continues his preparation for the Giro after finishing fifth at Strade Bianche and second overall in Poland last week. Similar to Vincenzo Nibali could the 35-year-old show his experience of riding Monuments and take the race to the young contenders? Fuglsang has Liège–Bastogne–Liège in the bag from last year – could he add a second Monument?

In Fuglsang Astana have experience but they also have a second option up their sleeve in Russia Aleksandr Vlasov. Third overall at the Route d’Occitanie, victory at the Mont Ventoux Dénivelé Challenge and fourth at the Gran Piemonte in the last two weeks – Vlasov looks a good talent. Only 24-years-of-age, he’s another rider with youth on his side and alongside Fuglsang they could be a threat this Saturday.

Other names to keep a watch for include Italian Diego Ulissi who was left in the wake of George Bennett at Gran Piedmonte on Wednesday. A few more metres and Ulissi might have taken the win to catch Bennett at the line so could he carry that frustration and make amends in Como?

Canada’s Michael Woods continues to recover from a broken femur he suffered at Paris-Nice pre shutdown and in current Tour of Flanders champion Alberto Bettiol, EF Pro Cycling have their cards to play.

You’d also have to include BORA-Hansgrohe’s German road champion Maximilian Schachmann as a favourite for the win too. He finished third at Strade Bianche, he’s won Paris-Nice and on a good day he can seriously climb. Schachmann starts as an outside bet to win Il Lombardia.

Lots of contenders, loads to talk about, Il Lombardia usually takes place in October. 2020 is a year like no other and as the second Monument instead of the fifth, who will claim victory this weekend?