Milan-San Remo marks the change between winter and spring – La Primavera as it is so often called – until coronavirus. We have a new summer date, a new inland route adding up to 299 km, the usual Cipressa and Poggio climbs before the finale on Sanremo’s Via Roma – for one year only this won’t be known as La Primavera.

The date and route might have changed but one thing hasn’t – unpredictability. Who on earth will win the 111th edition of Milan-San Remo is anybody’s guess but that’s why we love cycling!

The first Monument of the year is about to begin… 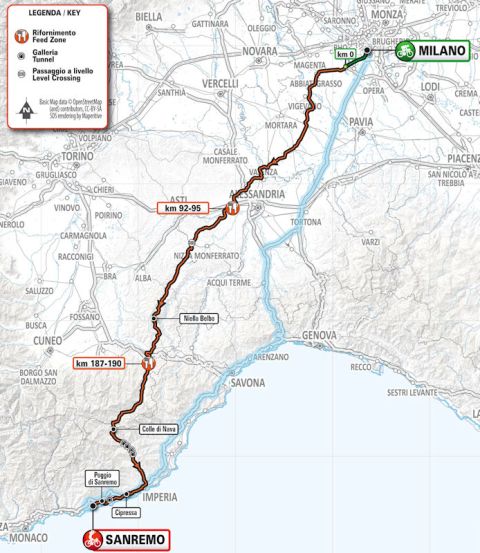 The new route inland from Milan adds an extra 10 km to the original route and features two new summits – the Niella Belbo and Colle di Nava. Because local authorities were concerned of the race passing through during high holiday season during the pandemic, this year’s race will unfortunately skip the early glimpse of the Ligurian Coast west of Genova.

Thankfully the famous Cipressa and Poggio di Sanremo climbs won’t be missed in the final 40 km – the only part of the original route to survive.

With more vertical metres this year, the pure sprinters might struggle to get over the early climbs unless they’ve got a full tank. The Poggio has seen decisive moves in the past three editions, so every contender will need to be on their guard.

Milan-San Remo might be known as ‘The Sprinters Classic’ but sprinters don’t actually have the given right to win on the Via Roma. Since 2010, only four editions have seen a bunch sprint and groups of no more than 30 riders tend to make the cut nowadays.

A new route makes it even more intriguing. Impossible to call, who will the finishing group be made up of? What will be the size of the group? A soloist, a group of all-rounders or a bunch sprint to the line?

Six riders per team perhaps make it difficult for the sprinters to stop potential attacks on the Cipressa or Poggio but you just never know in cycling.

Deceuninck Quick-Step’s Julian Alaphilippe is the defending champion as he builds up the Tour de France later in August.

So who are the contenders?

After a disappointing display at Strade Bianche last weekend, Alaphilippe will want to make amends, so never discount the Frenchman from springing a surprise. Quick-Step also have their options with Sam Bennett starting full of belief that he can win more and more. The Irishman already has a recent win at the Vuelta a Burgos and he can get over climbs so he’ll be in the mix.

Numerous sprinters will arrive in Milan who can climb very well to stay in contact. Milan-San Remo is the only Monument a sprinter can realistically win and it’s no surprise that Australian Caleb Ewan has come close in the past. Second in 2018, and an admirable 10th place on his debut in 2017 – Lotto Soudal have a contender here who can stick with the climbers but they also have their cards to play.

You would have to be pretty stupid to write off former world champion Philippe Gilbert. 38-years of age, looking to enter the five star club of winning every Monument in his career. Paris Roubaix last year was the Monument he was missing and now Milan-San Remo is the final one to add to the collection. Can the Belgian do it? There’s always a chance.

Other sprinters who can get over the climbs are also former winners. 2014 champion Alexander Kristoff starts alongside fellow fast man Fernando Gaviria for UAE-Team Emirates and recent winner of Milan-Torino Arnaud Démare will be supported by a Groupama-FDJ team that is all in for the Frenchman. Démare or Kristoff may not be the fastest but can certainly take on the climbs and sprint their way to victory.

In fact there are so many sprinters to choose from that could win. Bahrain-McLaren arrive with two names in Sonny Colbrelli and Iván García, who took a stage win at Paris-Nice back in March. NTT Pro Cycling have Giacomo Nizzolo, who’s shown some good form this year and in current European road champion Elia Viviani, Cofidis have a man to lead the team. Nacer Bouhanni for Arkea-Samsic might also be an outside shout.

If the sprinters can keep up with the pace then they’ll be in contention but let’s not forget the possibility of them being distanced – a chance for all-rounders to take the glory.

We’ve mentioned Julian Alaphilippe as defending champion, so what about others who can win from a group or maybe do it alone? Last year’s second placed rider Oliver Naesen is a fast finisher and can climb over long distances and in Michał Kwiatkowski, Team INEOS have a former winner, who in 2017 beat Peter Sagan and Julian Alaphilippe in a close sprint.

Milan-San Remo always seems to be the achilles heel for three times world champion Peter Sagan. His form isn’t the best at the moment and in Bora-Hansgrohe new talent is on its way in German Nils Politt. If Sagan wins this Saturday then it’ll be his best career achievement to date, same can be said for Greg Van Avermaet and CCC where a win would be huge for a team looking for new sponsorship.

Could an outsider perhaps cause a surprise.

It would be rude not to include Mathieu van der Poel, who may have had a disastrous ride at Strade Bianche but is certainly always a rider worth watching. 1985 was the last Dutchman to win Milan-San Remo, so could this new wonder kid in world cycling emulate Hennie Kuiper. This will be van der Poel’s third career appearance in Italy – if he wins it would be incredible.

Italian fans could be celebrating this weekend as their are plenty of home rider to choose from. We’ll never forget that legendary ride by Vincenzo Nibali in 2018, winning back-to-back Monuments and ending the Italian Milan-San Remo drought of twelve years since Filippo Pozzato in 2006. Nibali’s experience can see him through to the line, the great man, the ‘shark’ is in contention to repeat his 2018 win.

One final rider who starts as favourite is Wout Van Aert. Since his horror crash at the Tour de France last year, it’s pleasing to see the young man back in the best form of his life. Strade Bianche last weekend was a devastating display shown to his rivals. Soloing to the Plaza del Campo and then at Milan-Torino he finished third! He can sprint, he can time trial and he can attack on all kinds of terrain – Wout Van Aert is the man to watch this Saturday.

What are your predictions for the 111th Milan-San Remo? Leave us a comment and let us know your thoughts.